The 10 Countries With the Fastest Growing Economies For Freelancers

You can now get into profitable side-gigs, thanks to growth in technology. Although U.S. workers across all ages are making the most of the industry, younger freelancers in other parts of the world are quickly adapting to the new trend. The facts are according to a recent report by Payoneer, a digital payments platform, seeking to highlight the fastest growing economies in the world to hire a freelancer and their role in reshaping the nature of work.

Year over year revenue growth for the top freelancer countries

In 2019, the gig economy in the United States had the most significant growth with increased freelancer earnings of up to 78%, the Global Gig-Economy Index reveals. The research compiled data from over 300,000 freelancers in the Payoneer network. After the U.S., the U.K. and Brazil follow as the world’s largest side-gig economies. The two countries had an increase in gig worker incomes of up to 59% and 48%, respectively. Nonetheless, Asia surprised many by posting the highest regional growth. The earnings across four countries were up 138%. Pakistan led the Asian charge with a 47% increase in freelancer earnings over the past year.

Here is a tabulated list of the ten best freelance markets in the world, according to year-on-year growth in revenue.

According to the Vice President and the regional head of Payoneer for the Americas, Mr. Ian McNicoll, the increase in revenues in 2019 is partly due to changing perceptions concerning the viability of freelance work. With more and more professionals quitting their 9-5 jobs to join the gig economy, the effects are being felt the world over. In the UAE, for instance, there are more freelancers in Dubai compared to a few years ago. The professionals are leveraging on the increasing freelancer platforms like Bawabba and Nabbesh.

Reasons for the shifting workforce vary from one individual to the other, including;

Whatever the reasons, workers no longer feel the need to be tied to an office. Are you wondering why the freelance earnings are increasing in the above countries?

For the more mature freelance markets, including the United States and the United Kingdom, many companies want fewer risks such as allowances and workplace injury compensation when employing people. In this way, freelancing continues growing at a steady pace in those countries since independent contractors are not entitled to those benefits.

Interestingly, many other professionals voluntarily freelance for reasons around their lifestyles. Freelancing platforms provide an enabling environment to get into the gig economy, work-from-home industry, and enable clients to hire a freelancer of their choice.

In some markets like the Emirate, a key driver of growth in independent workers’ earnings is their government-proposed outsourcing for the industry, which is supported by tax breaks. With the Government endorsing the gig economy, statistics point to an increasing number of freelancers in the UAE.

Let’s consider an example from our list of the top ten fastest-growing markets for freelancers in the world. Ukraine has come up with a unique tax formula that exempts product companies and I.T. outsourcers from VAT. Also, the Ukrainian government allows companies and outsourcers to employ independent workers as subcontractors without labor tax. The companies also benefit from simple foreign exchange controls.

The Philippines is another success story of a government-backed gig economy. Through the Rural Impact Sourcing Technical Training Project, the Philippine Government offers training targeting local talent with ICT-based knowledge. In this arrangement, the practice enables locals to become digital entrepreneurs and workers.

The Government in India runs the Digitize India Platform project, which offers freelancing openings for local talent. Also, the Government provides digital skills training courtesy of the India Skills Online program under the Ministry of Skill Development and Entrepreneurship. The program focuses on supporting underprivileged groups, including women and youth.

Even as the gig economy attracts specialists of all ages in the United States, the situation is different in other markets where it tilts toward the younger generations. The younger generation is used to less formal employment or technically minded. Besides, developing countries have young adults topping the list of freelancers as they are trying to get a foothold in their careers.

Pakistan is a perfect example where freelancers below the age of 30 made 77% of revenue. The impressive results are due in large part to better technology education in the country over recent years. The small and underdeveloped domestic market further contributes to a younger workforce seeking alternative income opportunities. 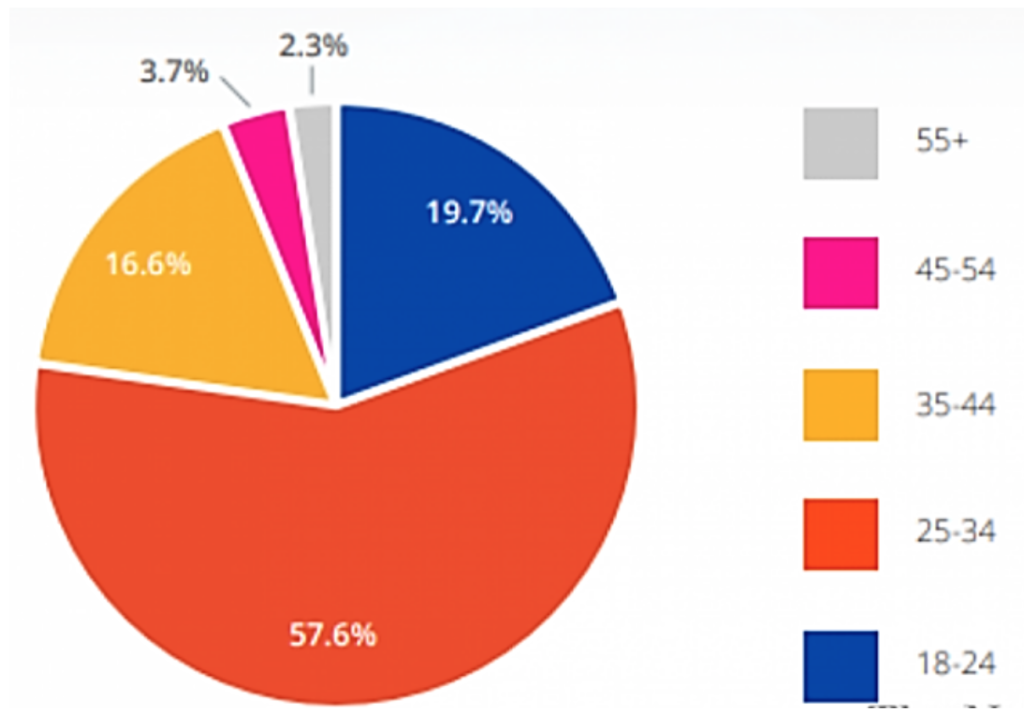 Pakistan Freelancer Earnings Based On Age

How Different Age Groups Stack Up In Earnings

According to Payoneer, professionals between 35 and 44 years are in favor of gaining the most from the gig economy. While that group represents about 23% of the global freelance population, it contributed approximately 32% of the total worldwide freelance earnings in 2019.

On the other hand, at 64%, workers between 18 and 34 years make up the most significant cohort, but their incomes were relatively lower at 53%. The 45-54 age groups made up about 9% of the worldwide freelancer population, with 9.4% in revenue. Independent workers aged 55 and above make about 5% of freelancers with a 4.9% global revenue contribution.

Markets like India and Ukraine have freelancers thinking like entrepreneurs. Freelancers in those markets are outsourcing the gigs they win to colleagues in countries with lower skills to make a profit. In this way, there are more opportunities in the freelance industry that target developing economies, especially in Africa. As more companies join the non-domestic freelance markets, prices will go up.

Smooth information flow between different countries continues to foster the phenomena. With the current trend, the Payoneer report projects consistent transformation in the gig economy.

In the past, freelancers would depend on the United States and the United Kingdom to outsource most work to developing economies. However, the top ten fastest-growing markets for freelancers in the world show Asia rising. You can hire a freelancer in Asia and outsource projects to other countries within Asia and beyond. The changing power among countries in terms of buying goods and services is a good thing for the global gig economy.

21 Best Chrome Extension for Freelancers in 2021