How Much Do Web Developers and Web Designers Earn in Dubai?

If you are unfamiliar with these fields, the job titles web developer and web designer may seem redundant. While both positions involve building a website, the responsibilities, skill sets, and training for each title are widely different. It is vital to know the different income levels for each position if you intend to become a freelance web designer in Dubai.

What is the Salary of Web Developers and Designers in Dubai?

PayScale estimates the median income for a web developer and designer in Dubai at AED84,000. According to the same statistics, 25% of web designers and developers in Dubai earn a salary of AED 50,000, while another 25% earn AED 177,000. The total annual pay, including incentives and bonuses, ranges from AED 5,000 to AED 497,000. The vast difference in earnings is because of varying experience levels.

Salaries by Experience Level for Web Developer and Designer in Dubai

During the early career years with one to four years of experience, a web designer and developer in Dubai earns an average of AED 49,800, including overtime pay, tips, and bonus. At mid-career with five to nine years of experience, the same professional earns AED 84,000 on average, exclusive of tips and gratuities.

For you to understand the pay scale of a web designer, we are going to give a brief explanation of the job title. A web designer deals with the appearance of a web application or website. As a web designer, you should be familiar with graphic design, color theory, as well as information flow.

Some web designing features such as information flow; often involve UX design or user experience. Furthermore, programs such as Photoshop and Adobe Illustrator, among others, are essential in the toolkit of a web designer.

Knowledge in CSS, JavaScript, and HTML are equally vital for a web designer, although some tasks do not require coding skills. Nonetheless, being digitally savvy is essential even if you cannot code.

With the features in mind, a web designer in Dubai can make about AED 57,000 annually, which is less than a developer’s average income in the same city. The average salary is without bonuses that can average AED 11,250, tips, and other allowances. The following illustrations show the average salary of a web designer in Dubai, from entry to professional levels, including benefits.

The Pay by Experience Level for Web Designers in Dubai 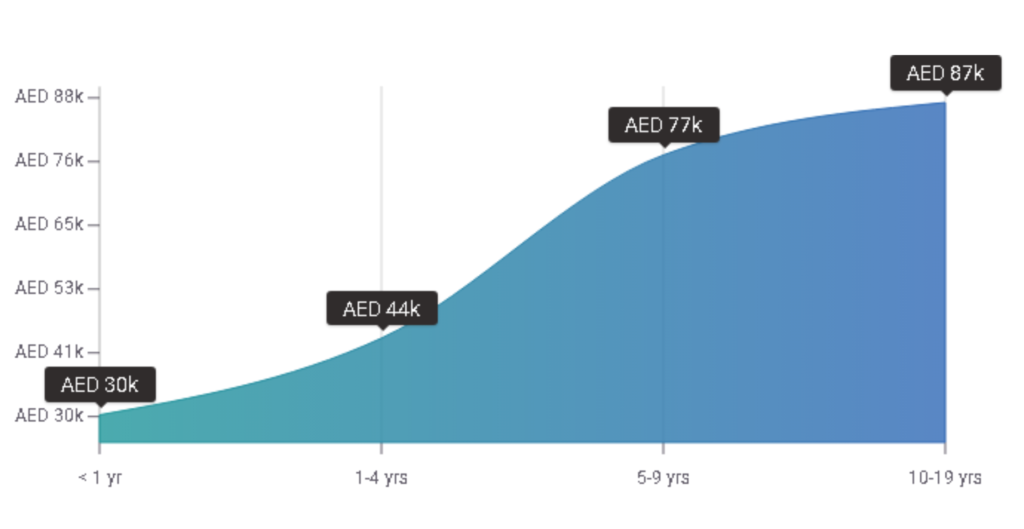 According to the illustration above, you can expect a total compensation of about AED 30,000 as an entry-level web designer in Dubai with less than a years’ experience. The income includes overtime payments, tips, and bonuses. If you are an early career web designer with up to four years of experience, the salary prospects are about AED 44,000.

At mid-career with up to nine years of experience, your average total compensation can be about AED 77,419. The expected full payment as an experienced web designer with over ten years of experience is about AED 87,000.  Skills in Cascading Style Sheets, HTML5, Adobe Photoshop, Web Design, and HTML can result in above-average pay, as shown in the figure below. 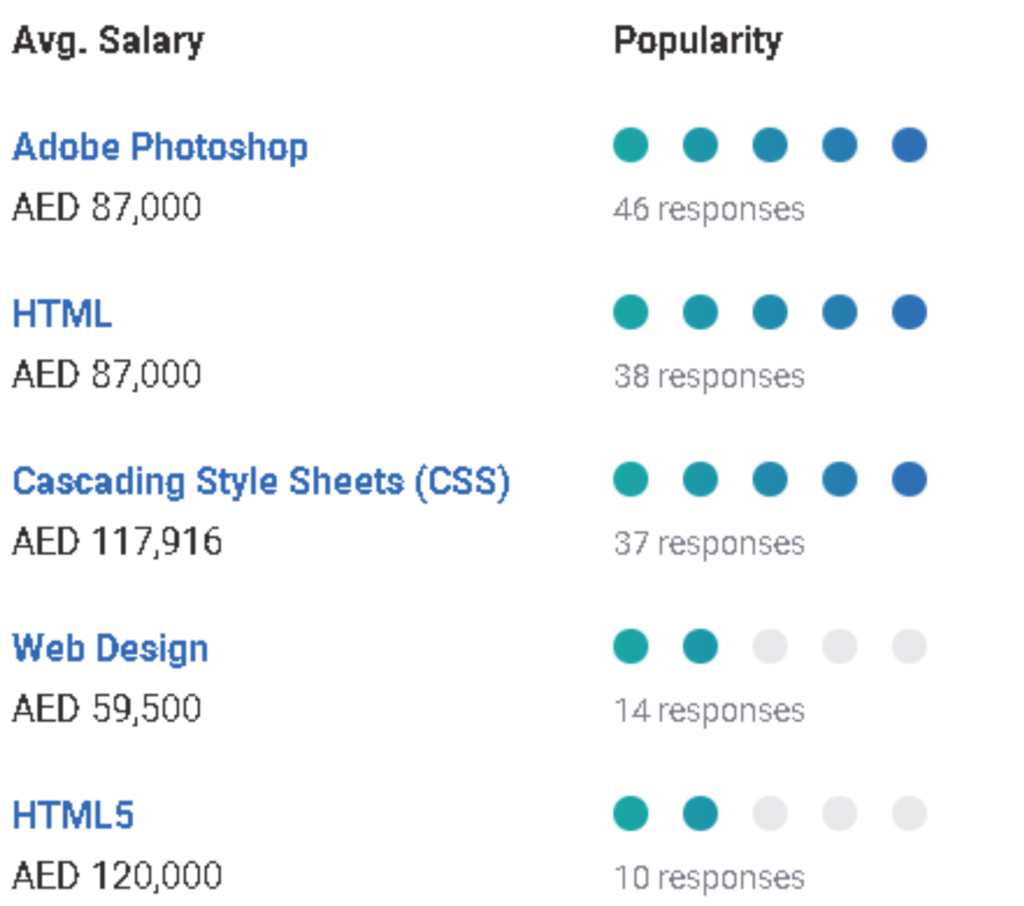 On average, a web developer earns AED 61,042 in Dubai, depending on experience and skill set.

Unlike web designers, developers must have coding skills with a focus on the functioning of a web application or the site itself. Functionality is the core concern of developers, with little emphasis on a website’s appearance. In this job title, you will find two significant categories of web developers: backend and front end.

Backend developers need specific knowledge in programming languages and frameworks such as Ruby on Rails. Also, a backend web developer should understand databases like MySQL.

Frontend developers should have an understanding of JavaScript, HTML, and CSS. Besides, front-end web developers and designers have so much in common.

The third category of a web developer is the full stack web developer. The individual is a skilled front and backend professional, or familiar with both the server-side and client-side.

The figure below shows the popular skills of a web developer and the average pay for each skill: 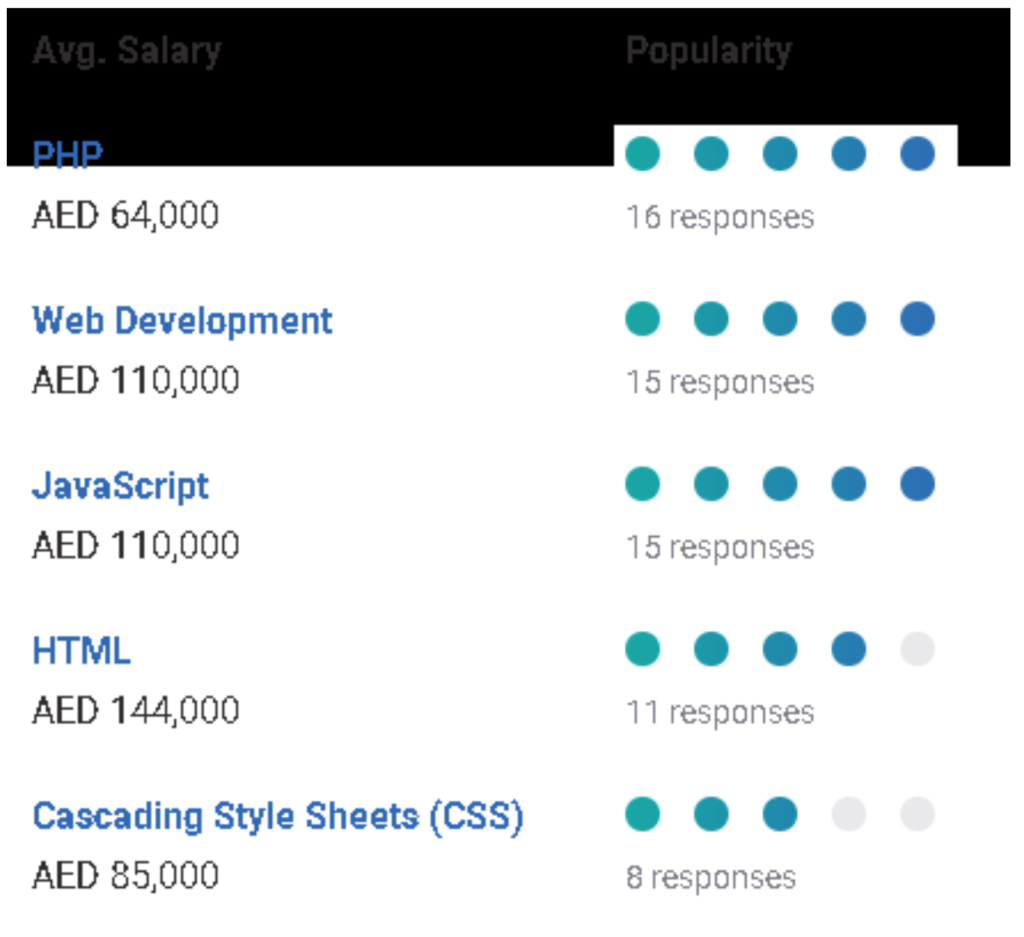 Different skills can affect your income. If your job title is a web developer and web designer, skills such as HTML5, CSS, Adobe Photoshop, HTML, WordPress, and Web Design can improve your pay scale. Mid-career with up to nine years of experience and relevant skills has the best pay for web developers and web designers in Dubai.

When it comes to securing gigs as a web developer, your work portfolio matters most. The majority of clients and hiring managers will be reviewing your code. On the other hand, web designers should have a solid Dribble profile, as most employers look for it when hiring. You can also register as a freelance web designer in Dubai on the Bawabba platform to increase your chances of finding work.

Skills every Web Developer Must Have To Create A Shopify Store